There was once a young girl who had five siblings, created her personal bedroom by utilizing a closet under the stairs, sewed her own clothing and even hand dipped her own candles. Though this may sound like a fairytale character’s story, this is actually a description of Angela Ahrendts’ youth. But these seemingly disheartening facts about her childhood years haven’t left Angela scathed. If anything, along with her religious convictions, they form the roots of a humble attitude and positive personality which have enabled Angela to catapult the success of Burberry and now land an opportunity as Apple’s Retail Chief. Angela has said of joining the creators of the IPhone, IPad, MacBook Pro, Apple OS X Mavericks and now IPad Air “I am profoundly honored to join Apple in this newly created position next year, and very much look forward to working with the global teams to further enrich the consumer experience on and offline. I have always admired the innovation and impact Apple products and services have on people’s lives and hope in some small way I can help contribute to the company’s continued success and leadership in changing the world” (The Business of Fashion). From this seam stitching, spool twirling, remarkably stylish and astoundingly talented leader, there is much to be learned.

If there’s one thing other than her title that has garnered Angela attention and respect, it’s her belief in the power of positive energy. In Earning Her Stripes, Angela says of energy and confidence “If there were 21,000 people there and they pass it to two who pass it to two more, you have the potential to really have an impact. And if the end result is that someone, somewhere winds up believing they can do something out of the ordinary, well, then you’ve really made it.” In fact, Angela has said, the concept of energy is at the heart of Burberry culture and comes from a deep core of shared values (Linkedin). 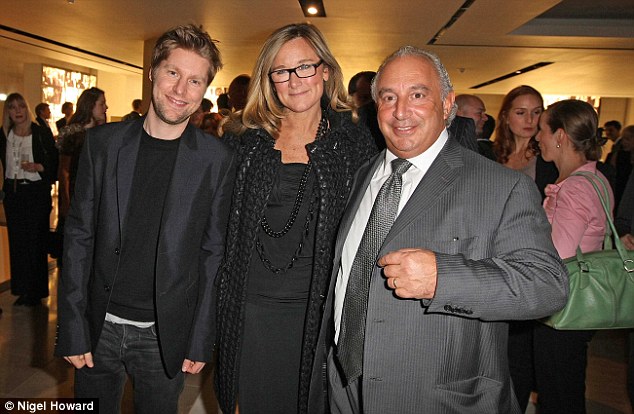 But Angela doesn’t just talk about energy on platforms like Tedx, she lives the concept. In 2008, a ripple effect caused by Lehman Brothers impacted Burberry; the expectation would be a 14 percent drop in revenue (WSJ). If there was a time a company might fall apart, it would have been then. Angela acted quickly, immediately cutting $78 million in expenses. In Earning Her Stripes, Nancy Hass explains “She put on hold plans to overhaul half a dozen flagship stores, froze raises and bonuses, and cut jobs—about 10 percent of the workforce. The company began shipping some of its products by boat instead of air. She slashed the corporate travel budget and started doing meetings by videoconference. To her, speed was crucial; swift surgery would leave less time to bleed and stop morale from deteriorating.” Clearly this was a difficult time, but because of her positive energy, Angela had the strength to make tough decisions and still gave company morale priority.

Angela has become accustomed to regular meetings and as a leader has developed strong listening skills. But beyond her ability to stay quiet while others are speaking; she is known for not interrupting or rushing. Her eye contact never waivers. In the article Earning Her Stripes, Nancy Hass describes Angela as “a CEO who mixes folksy sincerity and laser focus so effortlessly.” In contrast to some iron-fist or intimidating tactics, Angela’s leadership style of strong emotional intelligence mixed with encouragement enable her executives to feel comfortable with her. 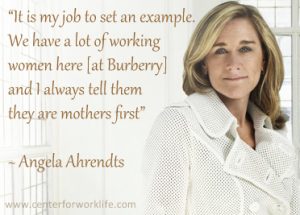 Angela and her family carve out a spectacular example of tackling work life balance. While Angela focuses on her career, her husband, Gregg, takes care of the home and kids (Working Mother). In interviews, the couple seems to feel they have found their groove and each of them are happy with their roles. So when it comes to work life balance, Angela’s lifestyle teaches leaders that an executive or demanding career path is a two sided decision that involves one’s spouse. Angela also reports that despite her demanding schedule that involves travel, she manages to be home every weekend. Prioritizing family time is important to her personally, but she also integrates this mentality into company culture. She once said “It is my job to set an example. We have a lot of working women here [at Burberry] and I always tell them they are mothers first” (Mail Online). Every leader must sort out values and create boundaries in order to avoid sacrificing relationships that matter most, which can yield tragic outcomes.

Leadership is not a walk in the park on a brisk day, sipping a tasty latte and munching on a scone. Being a leader isn’t about maintaining a glamorous look or always being at a high profile event. As can be seen in the lifestyle of Angela Ahrendts, the backbone of leadership is in sorting out personal priorities and living those out to the fullest which in turn inspires others to do the same.