Daring to have grit, but not eat too many grits 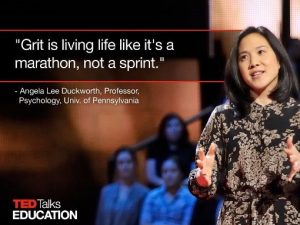 Psychologist, Angela Lee Duckworth launched The Duckworth Lab at the University of Pennsylvania. According to The Duckworth Lab theory and Angela’s research, grit and self-control are the two main traits that predict an individual’s success.

What’s the difference between having grit to accomplish dreams and having self-control not to over eat grits at breakfast? Grit is the determination and persistence to pursue long term goals, where self-control is the regulation of one’s behavior and impulses in the moment. Having worked for years studying behavior from children to adults, Angela maintains that often these traits co-exist, but not always. Though an individual may have the grit to write a book to which they dedicate five hours a week, when given the opportunity to watch television for an hour, they may not always have the self-control to write.

“There are many talented individuals who simply do not follow through on their commitments. In fact, in our data, grit is usually unrelated or even inversely related to measures of talent.” ~Angela Duckworth

There are a few valuable points to be taken away. Angela’s distinction that grit isn’t about talent, but rather following through with commitment, plays right into many commonly accepted philosophies often held by leaders, such as Thomas Jefferson ““I’m a greater believer in luck, and I find the harder I work the more I have of it.”  If you can relate to struggling through school and making every paper count, you’ve likely already learned this lesson. But if you’ve got talent and can’t understand what’s holding you back, this pertains to you. The most valuable, enjoyable success is earned through grit to stick it out through the tough road and hurdles before reaching the goal.

On the other hand, in disproportion to self-control, even enough grit to sail a submarine to the sky won’t get you far. As one might imagine, lack of self-control can significantly slow down the results of gritty characteristics, blocking successful outcomes.

If you’re penciling in developing more grit and self-control by next Tuesday, think again. This isn’t meant to be an easy assignment. Grit and self-control are both considered personality traits, which aren’t easy to acquire or change; similar to “changing your core personality traits, like extroversion.” But, your behavior is a process you can work on and change (Psychology Today).  These are the actions necessary for each outcome.  Long term, the behaviors will turn to outcomes you had initially planned. 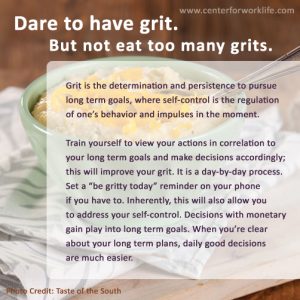 You may always have the inclination to lose your temper, but you can practice reining it in. It may never be easy to stop eating and put the rest of the grits in the fridge, but you always do have the ability to do it. Train yourself to view your actions in correlation to your long term goals and make decisions accordingly; this will improve your grit. It is a day-by-day process. Set a “be gritty today” reminder on your phone if you have to. Inherently, this will also allow you to address your self-control. Decisions with monetary gain play into projected goals. When you’re clear about your long term plans, it makes turning off the TV show to write your book a lot easier.