It IS Rocket Science

You’ve likely already heard of Elon Musk, but if you haven’t, this won’t be the last time you’ll see his name. As CEO and Chief Designer at SpaceX, Musk helped lead the organization to becoming the first commercial company in history to successfully recover a spacecraft from Earth’s orbit. As recent as 2012, SpaceX’s Dragon spacecraft became the first commercial space craft to successfully attach to the International Space Station and return with cargo (SpaceX). Accomplishments like these are achieved under great leadership. As Musk continues to make his mark in the business world, he’ll surly continue to display numerous strengths as a leader. But even now, there are plenty of great lessons to learn from this individual. Check out these leadership qualities of Elon Musk. 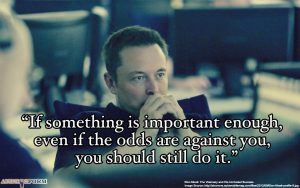 If the goal of a politician is only to attain a certain position in office or earn a specific award, where does that leave the public? And isn’t the good of the public supposed to be the purpose of holding office? You see the irony and tragic direction this headed? A direction of failure because of misplaced goals on the part of a leader and misplaced trust on behalf of their public. On the other hand, there are people like Elon Musk. Elon Musk’s leadership style has many strengths, but his purpose is what never lets him waver and keeps his team motivated. He believes so strongly in his goals, that his team is effective because they believe in him. What is his ultimate vision? Founder’s Fun Principal, Geoff Lewis, says of Musk “He’s doing this because he wants to see humanity colonize Mars.” Musk serves as an illustration by Lewis of how entrepreneurs become part of their vision (Forbes). Musk once said “If something is important enough, even if the odds are against you, you should still do it” (Business Insider).

It wasn’t comfortable for Gahndi or those following his leadership when they fasted to stand up for their freedom. It wasn’t comfortable or easy working for Steve Jobs when he scrutinized every possible detail of an Apple product during production. However, sometimes it is the very nature of discomfort that drives their success. It is living on the edge and out of a comfort zone that enables innovation. “The challenge is that he is a machine and the rest of us aren’t. So if you work for Elon you have to accept the discomfort. But in that discomfort is the kind of growth you can’t get anywhere else, and worth every ounce of blood and sweat” says SpaceX employee Dolly Singh when asked what it’s like to work with Elon Musk (Business Insider).

Talking about failure may not seem optimistic, but it’s all about perspective. In 11 Elon Musk Quotes That Show His Genius, Jillian D’Onfro of Business Insider cited Musk’s quote “Failure is an option here. If things are not failing you are not innovating enough.” This is the kind of mentality that allows for obstacles and failure, because of the knowledge that confidence and perseverance will ultimately prevail. SpaceX employee Dolly Singh also commented on SpaceX’s first rocket launch. Due to technical difficulty, SpaceX’s staff was demoralized and disheartened by setbacks. But she remembers Musk told them all (about 300 employees) something like “We knew this was going to be hard, it is after all rocket science; then listed the half dozen or so countries who had failed to even successfully execute a first stage flight and get to outer space, a feat we had accomplished successfully that day.” Singh describes that as the most impressive display of leadership she had ever witnessed (Business Insider). 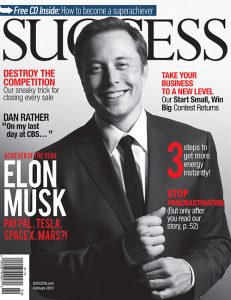 When someone sets out to lead so they can be liked, or so they can earn an award or title, they’re actually setting out to fail. True success comes to those who have purpose and vision. Leading is about having goals, but also helping others to find and achieve their goals. So, if you want to lead like Elon Musk, remember failing is part of innovation, and optimism will propel you forward.