Anne M. Mulcahy was chairperson and CEO of Xerox Corporation beginning in 2001 and 2002. She has also been a member of the boards of directors of Catalyst, Citigroup Inc., Fuji Xerox Co. Ltd. and Target Corporation (Wikipedia). Named ‘CEO of the Year 2008′ by Chief Executive magazine, Anne proved she could offer something special as a leader in the business world. Anne took on her leadership role at Xerox at a turbulent time for the company, but she was determined to make the best of it. A few key qualities enabled her to lead the company. 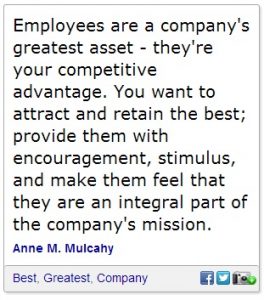 In a turbulent economy, it’s hard to find loyal employees, much less dedicated leaders. However, Anne was a 25 year Xerox veteran when she stepped into the CEO shoes. And despite the fact that the company was near bankruptcy, she committed to make changes and tough decisions to get it back on track (US News). In hard times, loyalty can be the most valuable quality of a leader.

Shifting from expensive consumer printers, Anne took a gamble and focused on the new technology of high end color digital printers and consulting services. She realized that the world was changing and Xerox needed to get ahead of the shift. “Companies disappear because they can’t reinvent themselves,” she said (US News).

Even when Anne had to cut jobs and sell divisions to get the company on track, she still strove to value company culture (WTTW11). She once said “Employees are a company’s greatest asset – they’re your competitive advantage. You want to attract and retain the best; provide them with encouragement, stimulus, and make them feel that they are an integral part of the company’s mission (Brainy Quote).”

By the time Anne left Xerox in 2010, the company was rejuvenated and successful. This was because Anne had the loyalty to see it through, she was willing to take risks in innovation and she was wise enough to focus on human capital through talent development.