Virginia Marie “Ginni” Rometty has been at IBM since 1981 and now acts as Chairwoman and CEO for the company. IBM is number four on the “World’s Most Valuable Brands” list and employs 466,995 people (Forbes). Managing one of the world’s largest workforces isn’t easy, but Ginni gets it done. She has been on Fortune magazine’s “50 Most Powerful Women in Business” list for eight years, ranking number one in 2012. Forbes ranked her number fifteen on their “World’s 100 Most Powerful Women” list (Wikipedia). She has certainly carved her place as a top performer in the modern business world. In studying her leadership style, there are three consistently noticeable qualities that have enabled her growth as a leader and her success. 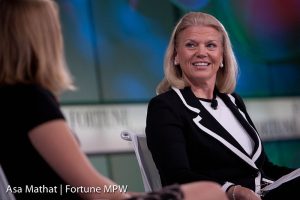 Individuals like Ginni who find themselves in charge of a Fortune 500 company are not so different from small business owners or even entry-level professionals in some ways. For example, all professionals face important decisions that are often scary or highly unpredictable. This leads to deciding whether or not to take a risk. If Ginni Rometty can teach us something about leadership, it’s that risk-taking is important to success. In an interview, she explained that growth and comfort don’t usually coexist. Like many remarkable leaders, Ginni knows that the way to grow is to try new things and push through new challenges.

She Aligns Her Workforce

Despite IBM’s size, it would seem the organization has a handle on aligning and motivating employees. And the company could have a higher employee review score on Glassdoor, but its approximate $16 billion profit for the previous year speaks to the dedication of success of the human capital. When asked how she keeps employees aligned, Ginni explained that she carves out a few long-term strategic beliefs around which employees can jointly focus. She explained that this instills in employees that they’re coming to work for a higher purpose and a common overall goal. For example, IBM is currently focused on the belief that Cognitive Computing is the next era for computer technology, which could make a vital positive impact on the medical community, among other industries. The company also utilizes social business. She compared social business to social media; an internal communication method for employees to discuss ideas (Fortune Interview).

She Knows That Actions Speak Louder Than Words

Ginni likes to share a story about how her single mother made a huge impact on her through actions rather than words. Her mother went to night classes and worked to take care of their family. Ginni says there were three important things she learned from watching her mother. The first is that actions speak louder than words, the second is that nothing is insurmountable, and the third is to define one’s self, rather than being defined by others. Now Ginni always remembers she doesn’t have to say her beliefs, she has to live them (Fortune Interview). One of the ways her actions have spoken louder than her words is when she declined her performance bonus from IBM. “Equilar’s Boyd says when a CEO declines a bonus, it’s a way of demonstrating to shareholders that they’re focused on setting the company up for success. ‘They’re not just dying to get the money without thinking about the health and well-being of the company and its shareholders’” (Washington Post).

Ginni has said “when you don’t believe in the inevitable, it means you don’t expect that that’s how things have to turn out. You can change them.”Perhaps that is one of the most meaningful quotes for leaders everywhere. Nothing is set in stone and there is room for change and improvement around every corner. Like Ginni, leaders who take the time to grow, align others for success and let their actions speak louder than their words are on a track for success.