Jo Rowling (also known as J.K. Rowling) is the United Kingdom’s best-selling author and the creator of Harry Potter, which has become one of the most successful franchises in history. The 2008 Sunday Times Rich List estimated Rowling’s fortune at £560 million ($798 million). Forbes ranked Rowling as the forty-eighth most powerful celebrity of 2007, and TIME magazine named her as a runner-up for its 2007 Person of the Year, noting the social, moral, and political inspiration she has given her fans (Wikipedia). However, her success is not just defined by financial gain or awards, but more importantly the impact she has made in the lives of billions of people. 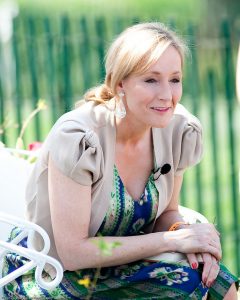 Rowling once said “I believe in hard work and luck, and that the first often leads to the second” (Forbes). The world has become acquainted with Rowling’s story of struggle. She said that seven years after graduating college, she was jobless, a single mother and living on government support. But she also said “I was set free because my greatest fear had been realized, and I still had a daughter who I adored, and I had an old typewriter and a big idea. And so rock bottom became a solid foundation on which I rebuilt my life” (Brainy Quote). Leadership isn’t about living without failure and commanding actions from others. Leadership is the result of vision and perseverance which inspires others.

Rowling is the first to admit that taking a risk on something meaningful is scary but rewarding. Harry Potter’s success today is vastly different from its beginnings when the manuscript was rejected by 12 publishing houses (Wikipedia). Rejection was a reality Rowling knew she faced in pursuing the publication of her story. In fact, Rowling has explained in interviews that she didn’t even expect to make a living off of the books. However, writing the books wasn’t about making a lot of money, it was about doing what mattered to her. The lesson from this icon: don’t be afraid to fail and be afraid not to invest in what matters to you. Take chances and pursue dreams. “It is impossible to live without failing at something, unless you live so cautiously that you might has well not have lived at all, in which case you have failed by default” (Jo Rowling, Brainy Quote).

Rowling is an outstanding leader who communicates effectively and lives by example, changing the world one book, and one speech, at a time. A Leadership Qualities of Jo Rowling list could likely fill the pages of a novel. Her ideas and values have littered the pages of her best-selling books, which inspire people on a daily basis. Like Rowling, anyone who wishes to accomplish something amazing and perseveres to make it happen becomes a leader by default. These are the people that have important vision and aspire not to control others, but to contribute something meaningful to the world.