Larry Page is the man who had a dream that the internet could be downloaded and saved as links so websites could be more quickly accessed. This was the dream from which Google was born.

In addition to being the co-founder of Google, Page has also won awards such as the Marconi Prize and TR100 (Google). Though he recently landed #29 on Forbes Youngest Billionaires of 2013 list, perhaps it’s even more notable that he holds a 93% employee approval rating on Glassdoor and is #5 on Glassdoor’s annual 50 Highest Rates CEOs list. If successfully managing Google, which ranks #55 on the Fortune 500 list and keeping employees happy isn’t a sign of great leadership, what is? 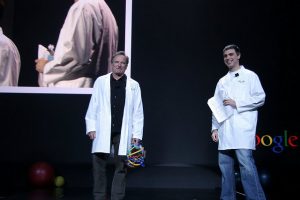 Talk about the future

In 2005, Larry Page told University of Michigan’s engineering graduates to “talk about the future.” It isn’t the only time Page has tackled that topic. He frequently champions the importance of innovation. “Lots of companies don’t succeed over time. What do they fundamentally do wrong? They usually miss the future” Page once said (Brainy Quote). Like Steve Jobs and many great leaders, Larry Page recognizes the importance of embracing crazy ideas and sorting out the ones worth chasing.

Larry Page is not a leader who has missed the boat on the concept of helping and empowering employees in order to help the business. He words his feelings on this well “My job as a leader is to make sure everybody in the company has great opportunities, and that they feel they’re having a meaningful impact and are contributing to the good of society. As a world, we’re doing a better job of that. My goal is for Google to lead, not follow that” (Brainy Quote).

“Rome wasn’t built in a day” is what they say, and neither was Google. According to one CNN article “It took Page some six years to get staff to work on Google’s book digitization project. He came up with the idea when he and Brin were students at Stanford, and the first books were scanned in 2004.” It also took several years to convince others to join his Google Maps with street view effort, much less launch it (CNN). Moving forward he acknowledges “The ultimate search engine would basically understand everything in the world, and it would always give you the right thing. And we’re a long, long ways from that” (Brainy Quote). However, despite the time it takes to achieve big goals, Page perseveres because he wants to make a difference.

Larry Page has room to grow, like every leader. But overall, he’s got some pretty valuable traits when it comes to innovation, strengthening a team and staying productive. If his accomplishments and leadership qualities aren’t inspirational for growing leaders, what is?