Vinton Cerf is considered one of the “fathers of the internet.” He has served as Vice President and Chief Internet Evangelist for Google since 2005. He previously worked at the US Department of Defense’s Advanced Research Agency and has been a faculty member at Stanford University. He’s most frequently acknowledged for his technological accomplishments and business savvy. But, Vint Cerf’s actions and words can also teach the world about rich and effective leadership. In fact, among numerous achievements, Vint has been recognized for his leadership skills with awards such as the Computerworld/Smithsonian Leadership Award and J.D. Edwards Leadership Award for Collaboration (ICANN). Based on his own words and achievements, below is a list of Vint Cerf’s leadership qualities.

Like many loved leaders, Vint recognizes that leadership isn’t about charging into battle alone, but unifying the troops strategically for action and empowering them. In an interview on Meet the Boss, when asked how he feels about being called “the father of the internet” Vint responds that many people contributed to the creation of the internet and it wouldn’t be what it is without collaboration. Even in a statement to the Joint Economic Committee in 2000, Vint referred to the vital role of teamwork in the country’s defense “To minimize the likelihood of, minimize the possible impact from, or prepare a response to a coordinated, comprehensive attack on critical US infrastructure will require coordinated, comprehensive teamwork by government and industry.”

The internet has been around a while now, but Cerf is still equally invested in its success and its functionality. The Guardian’s interview with Cerf gives him a chance to talk about the teams that are working to improve internet security. This is one example of his continued pride and investment in what he started. The mark of memorable leaders is obvious by the care they show toward their products, which is a reflection of their care for consumers. This permanent investment and support behind one’s creation is a display of taking ownership.

This is a quality essential to effective leadership. Like many great leaders, Cerf is skilled at finding others who have vision and helping them achieve their goals. He is so skilled at this that he now serves as Google’s Chief Internet Evangelist. This is a role that includes the responsibility of finding other people who want to improve the internet and sponsoring their efforts to do so (An Interview with Vint Cerf in Mauritius). He said in an interview with The Guardian “You want to do something big, you have to use the Tom Sawyer model, which is get everyone else to do it.” 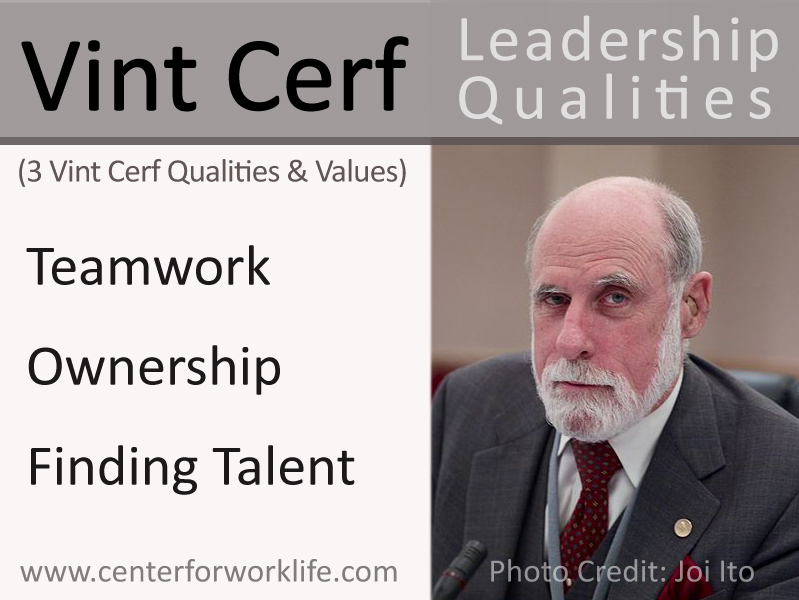 These leadership qualities of Vint Cerf and studying values of leaders in general may seem repetitive or obvious. But are they really? When it comes to implementing effective team management or ownership of responsibilities on a day-to-day basis, sometimes it helps to remember how these qualities play into decision making and actions. Every memorable leader has learned from heroes in generations before, and by example, leaders like Vint Cerf are teaching young professionals how to change the world tomorrow.