Theme parks have taken a hold on modern society. They provide relief, fun, encouragement and inspiration for people around the world. They dazzle with genius rides and carefully constructed creations like a forty-three foot long Lego Star Wars X-Wing. However, these entertainment giants aren’t built overnight and they certainly don’t build themselves, not so unlike professional leaders.

In searching for company leadership, modern companies are becoming more and more reliant on trying to lure established leaders. With the economic struggles facing society, organizations depend on proof of successful leadership in other companies when bringing in new recruits. However, this strategy more often than not results in troubled outcomes. By comparison, Legoland would likely see disastrous results if they recruited a Disney princess to head theme park design. Fictional or not, who could imagine a Disney princess accurately holding up the Lego brand? This isn’t to say that it’s always bad to bring an established leader into a company, but companies often do well to also search for leadership potential internally and utilize succession planning. 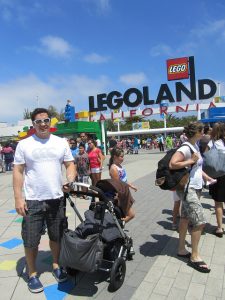 Companies such as McDoanlds and LLBean have proven the power of effective succession planning. So how does one spot potential leadership? The tips below are helpful for the process.

6 Signs of a Potential Leader:

1)      Potential leaders interact with and engage people around them. They don’t hide behind a computer screen or avoid eye contact.

2)      Potential leaders are able to acknowledge mistakes, both their own and those of others. They’re also able to spin a positive light on negative situations and move forward to achieve goals.

4)      Potential leaders exude confidence and clarity of thought both through verbal communication and body language. However, they are not boastful or prideful.

5)      Potential leaders are self-starters. They likely have a variety of experiences and background in an array of areas because they thirst to learn, grow and achieve.

6)      Potential leaders show a strong display of healthy and maintained relationships. They don’t struggle to provide references and have a strong network of friends, family and professional relationships.

The work doesn’t stop at finding leadership potential. Companies who see Fortune 500 success are those that go beyond recruiting leaders and focus on retaining employees through engagement efforts and development succession plans. Legoland didn’t build itself, and Bill Gates didn’t become one of the most successful leaders of modern times without being nourished through mentorship.