At best, Human Resources departments across the private sector have been struggling to stay afloat through recent NLRB (National Labor Relations Board) changes. New developments in the situation hardly promise an end to the hurricane, but if you’re caught in this mess, having an internal conflict resolution guide will be very effective in keeping discussions, discussions rather than arguments and escalating conflicts.  Feel free to take some life-rafts from us. 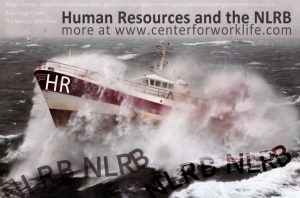 “The National Labor Relations Board is responsible
for enforcing protections that are fundamental
to growing the economy and creating jobs
from the middle class.”

As reported by the Washington Post, in 2012 Obama appointed Sharon Block and Richard Griffin as board members on the NLRB. The problem: the senate was on break at the time of the appointment, so the confirmation process was bypassed. On July 16th 2013, Obama announced two new nominees for the National Labor Relations Board, leading the public closer to a resolution of the issue. However, since the unconfirmed board members served on the NLRB for approximately a year, it is possible that many decisions made since their appointment will have to be revisited. In Looking Beyond NLRB Confirmations, Proskauer’s Partner Larry Lorber points out the controversial nature of many NLRB decisions made since 2012, which could very well dredge up many changes in outcomes.

Meanwhile, Human Resources departments and Entrepreneurs are left struggling; trying not to drown in the confusion. Everyone wants to know what changes might be coming down the pipe. As confirmed by Larry Lorber and many others, it is just too soon to tell what will come of all this. Still, there are some basic guidelines that can help companies stay out of trouble and avoid shipwreck.

How to deal with the current state of the NLRB

* Be aware of what your organization can and can’t do if targeted by a union.

* Due to the evolving nature of social media and highly viral employer/employee public interactions, which are sometimes damaging, remember to clearly communicate Social Media Networking policies to your organization. Refer to advice from Lynn C. Outwater on specific guidelines for creating social media policies.

* Given the obvious state of perpetual changes, stay up-to-date on NLRB regulations and news.